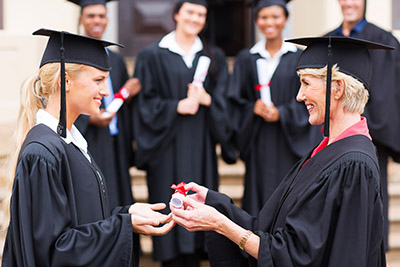 Established in 2009, this award recognizes an outstanding woman leader who has made significant contributions to higher education in Ohio. This is the Network's highest external honor. The award winner should have served as a role model and leader to other women in the field of higher education through her demonstrated commitment to the leadership development and advancement of women on her campus and in the community. The Awards committee reviews applications and makes recommendations to the Executive Board who determines the recipient.

Professional women employed by any ACE Women's Network-Ohio participating college or university are eligible to apply. To find out how to nominate someone for this award, please click on the link listed under "Award Application" or send an email to Angela Paprocki, Awards Committee Chair at ace.wno.awards@gmail.com.

Deadline for applications is Monday August 31, 2020.

Patricia McSteen, PhD (2019) is the Associate Dean of Students at Ohio University and received this year’s award for her visionary leadership. McSteen created one of the first Behavioral Intervention Teams in the country in higher education at a time when mental health issues are on the rise on college campuses across the United States and was instrumental in rebuilding the Survivor Advocacy Program on her campus. In addition, she created and implemented the Margaret Boyd Scholars Program, named after the first female graduate of her institution. The focus of this program is to inspire and encourage undergraduate women to become engaged, confident, and connected leaders within the University and beyond, which is directly aligned with our mission here at ACE WNO.

Maggie McKinley (2018) is the Executive Senior Associate Athletic Director and Senior Woman Administrator at the University of Cincinnati. In her current role, McKinley provides strategic direction on departmental initiatives focused on student-athlete welfare, gender equity, Title IX, compliance, and diversity and inclusion. A graduate of the LEAD1 Athletic Directors’ Institute and the Women Leaders in College Sports Executive Institute, she serves as the chair of the American Athletic Conference Track & Field committee and Women Leaders in College Sports Governance committee. She previously served on the National Association for Athletics Compliance Strategic Initiatives and Communications committees and Women Leaders in College Sports Foundation Fund committee. On campus, she is a co-advisor for UC’s Student-Athlete Advisory Council, the chair of the department of athletics’ diversity, equity and inclusion ONe Team committee and is a member of the University’s Diversity Council, and Bias Incident Response Team.

Dr. Karen Bankston (2017) is the Associate Dean for Clinical Practice, Partnership and Community Engagement of the College of Nursing at the University of Cincinnati. Dr. Bankston. Dr. Bankston has been serving in health care for 40 years. In her current role she is responsible for developing and maintaining partnerships with nursing and other disciplines at UC, while also engaging in community based research focused on student and parental success in the urban core. Additionally, she is the president and CEO of KDB and Associates Consulting Service, a company she founded. She tirelessly serves in multiple organizations as well, including the Health Alliance departments of community health and diversity, the boards of United Way of Greater Cincinnati, the Live Well Collaborative (which she Chairs), Legal Aid Society of Southwest Ohio, The Children’s Home and the Urban League of Southwest Ohio.

Dr. Bankston earned an Associate in Applied Science (AAS) degree from Youngstown State University, a Bachelor of Science in Nursing (BSN) and Master of Science in Nursing (MSN) from Kent State University, and a doctoral degree (PhD) from the University of Cincinnati with a focus on administration and organizational behavior. The awards committee and executive board were particularly impressed with her leadership in supporting the promotion and success of women. In fact, upon the awards committee’s announcement to the executive board, of Dr. Bankston’s selection as the awardee, several members’ immediately expressed their excitement and shared stories of how she had encouraged them (and others) and positively influenced their careers.

Dr. Janice Walker (2016), Assistant to the President and Chief Diversity and Inclusion Officer, Xavier University. Dr. Walker received her bachelor’s degree in Mathematics from Tuskegee University, and her master’s degree and PhD, both in Mathematics, from the University of Michigan. Prior to her current role, Janice served as the Dean of the College of Arts & Sciences at Xavier for over 16 years. Janice is recognized for her trailblazing spirit. She has experienced many firsts, for example, she was the first woman to successfully navigate through the tenure process in the Department of Mathematics and Computer Science at Xavier. She then became the first woman and African-American to chair the Department. Seven years later, she became the first woman dean. As a trailblazer, Dr. Walker has been instrumental in recruiting and mentoring other women faculty. She tirelessly supports these women by providing funding, encouragement and by sharing her experiences navigating the University system. She also extends this support by leading a grant to host a STEM Summer Camp for Middle School Girls. The awards committee and executive board were particularly impressed with her leadership in the promotion and success of women and her ability to effectively manage her own personal and professional path.

Dr. Bonnie L. Coe (2015), President of Central Ohio Technical College in Newark Ohio. Dr. Coe, originally from Gallipolis, Ohio, received her bachelor and master’s degrees from The Ohio State University and her doctoral degree from The University of Dayton. She has also participated in the Harvard Institute for Educational Management and Harvard Seminar for New Presidents. Dr. Coe’s work experience varies from training and development at a number of hospitals in Ohio, to high school teacher, high school principal, researcher and consultant, Interim Director an Co-Principal Investigator at Sinclair Community College, Vice President and Dean of Faculty at Central Ohio Technical College, and lastly, in May 2004, her appointment to President of Central Ohio Technical College.

Dr. Pamela K. Shay's (2014) current roles include serving as the Provost and Senior Vice President of Academic, Athletic, and Student Affairs at Urbana University where she is responsible for the day to day direction of the university. Additionally, at Franklin University, she serves as the Vice President of Accreditation & Institutional Effectiveness, and leads the institution's state, regional, international, and discipline-specific accreditation and authorization activities to focus attention on assuring institutional effectiveness. Dr. Shay earned her Doctorate in Business Administration from the University of Sarasota/Argosy University with an emphasis in both strategic management and marketing. Her zeal for applying educational theory to practical work experiences has served her well in her almost-30-years in higher education. She has always been business minded and this led her to develop academic programs specific to the needs of adult learners and to establish a non-profit incubator to provide a central location for several community service agencies and organizations. Most recently, she was awarded the Frank V. Mastrianna Education Leader of the Year Award at the 2014 International Assembly for Collegiate Business Education Conference. This award honors leaders within the higher education realm who have made significant contributions to higher education, their communities, and the International Assembly for Collegiate Business Education.

Dr. Judit Puskas (2014) is the Joseph M. Gingo Chair in Chemical and Biomolecular Engineering at The University of Akron's College of Engineering. She received a PhD in plastics and rubber technology in 1985, and an M. E. Science in organic and biochemical engineering in 1977, from the Technical University of Budapest, Hungary. Dr. Puskas has been published in more than 350 publications, including technical reports, is an inventor or co-inventor of 30 U.S. patents and applications, and has been Chair or organizer of a number of international conferences. She is the recipient of several awards, including the 1999 PEO (Professional Engineers of Ontario, Canada) Medal in Research & Development, a 2000 Premier's Research Excellence Award, the 2009 "Chemistry of Thermoplastic Elastomers" Award of the Rubber Division of the American Chemical Society, the 2012 Woman of Achievement Award, and the 2014 Outstanding UA Researcher Award. She was elected Fellow of the American Institute of Medical and Biological Engineering in 2010, and of the International Union of Pure and Applied Chemistry in 2013. In 2012 she was one of the five winners of the GE Healthymagination Breast Cancer Challenge Award, selected from over 400 international applications. Professor Puskas has raised over $4 million for research in Canada, and over $10 million since joining The University of Akron. As a co-inventor of the polymer used on the Taxus® coronary stent, Puskas helped The University of Akron generate more than $5 million in license fees.

Dr. Jacqueline McMillan (2013) currently serves as the Vice President of Enrollment Management at Wright State University where she has held multiple roles, each with increasing responsibility. Dr. McMillan has not only served as an impactful leader on campus and in the community, but she has also mentored and supported countless women students, faculty, staff and administrators. She is known and admired by her colleagues for her keen mind, her kind words of support and encouragement, and her strong track record of successful projects and initiatives. She is a strong role model for women and men alike that through action and leadership has made the Dayton area a strong community. Dr. McMillan earned a PhD in Higher Education Administration from the Union Institute and her MS in Administration from Central Michigan University. She remains active in her community and is currently serving on the Board of Directors for both Big Brothers/Big Sisters of Greater Miami Valley and the Nathaniel Anthony Ayers Foundation of Atlanta, Georgia.

Dr. Diana Bilimoria (2012) is the Key Bank Professor of Organizational Behavior in the Weatherhead School of Management at Case Western Reserve University. Throughout her career, Dr. Bilimoria has focused research on the gendered climate of organizations, women's leadership, ways in which women can achieve success, and the transformation of organizations to achieve gender, racial and ethnic equality. Dr. Bilimoria has authored three books and more than 100 papers. She recently published a book, Gender Equity in Science and Engineering: Advancing Change in Higher Education, which describes strategies for eliminating barriers to the academic advancement of women faculty members. In addition to her academic work, she has given freely of her time and talent to help women faculty and staff inside and outside of the academy in a variety of settings.

Dr. Carol Cartwright (2010) is President Emeritus of both Kent State University and Bowling Green State University, having served as the first female president of both institutions. Dr. Cartwright earner her master's and doctoral degrees from the University of Pittsburgh and a bachelor's degree from the university of Wisconsin-Whitewater. Her academic career was distinguished by innovative teaching, pioneering research and national leadership. Her contributions at Kent State included a re-focusing of institutional priorities upon student success, outstanding teaching, and the introduction of new academic programs, while at BGSU she undertook a new strategic plan, a new campus master plan, the largest construction and renovation program in the history of BGSU, and the launch of a path-breaking new undergraduate curriculum. Cartwright held prominent leadership roles in higher education's most influential national organizations, including the American Association for Higher Education, the American Council on Education, the national Association of State Universities and Land-Grant Colleges, the American Association of Colleges and Universities, and the National Collegiate Athletic Association. Among others, she served on the Board of Trustees of the Woodrow Wilson International Center for Scholars, the National First Ladies Library, the Knight Commission on Intercollegiate, the American council on Education Commission on International Initiatives, and National Public Radio.

Dr. Lynn Singer (2009) serves as Deputy Provost and Vice President for Academic Affairs at Case Western University. As a professor of pediatrics and psychiatry, Dr. Singer has directed federally funded research projects that represent $25 million of funding to the university. Dr. Singer earned her MA and PhD in clinical psychology from Case Western Reserve University. Previously she had earned a bachelor's degree from Duquesne University and M.Ed. from the University of Pittsburgh. She has edited two books and authored more than 100 articles in the medical and psychological literature. Dr. Singer also serves on numerous national NIH and other governmental review committees.

this content item is from ACE Ohio Women's Network
( https://www.aceohiowomen.org/plugins/content/content.php?content.52 )